As part of output one of my Diploma in Permaculture design I mapped out a Skill flex.
I divided this into Four main areas;

I doubt that area 4 will be completely accurate over the course of time, but it will be interesting to see how much of what I have listed that I will address by the time I reach accreditation, and how much else that I haven`t considered consciously yet will also evolve.   It`s all part of the design process, and will of course involve considerable review and reflection. 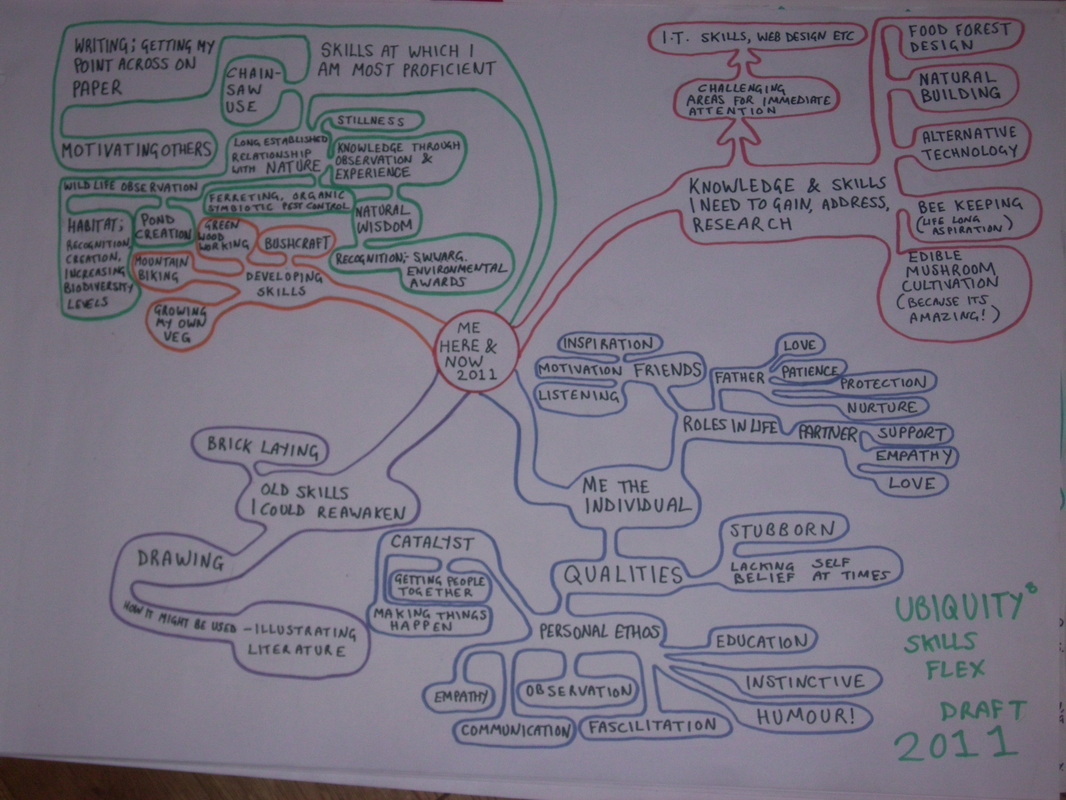 Pond and habitat creation for wildlife 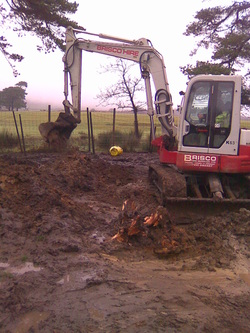 I have worked on a number of pond creation and habitat manipulation projects with the chief objective of increasing biodiversity levels at sites that noticeably needed it.  Rather than go through each such project individually I have put together a "collage" of images from several different pond projects.  Each project was different of course but a common theme ran through all of them. Wherever possible, people were involved.  My primary concious objective at the time was to create further habitat for what I call the base line species of ecosystems, invertebrates, plants and amphibians, a kind of "don`t look after the lions, make sure that there is plenty of habitat for the zebras and wildebeest, and nature will do the rest" philosophy.

However, another species also benefited significantly, people.  I always aim to involve a broad spectrum of groups of participants and volunteers in such projects, and everyone from "mainstream" children and adults, young offenders, autistic spectrum children and adults, to Schools, University students and graduates and corporate volunteers engaged in the projects.  Everybody developed an increased connection with nature to some degree, some individuals markedly, as a result of such work.  Spontaneity, creativity, strong emotions, and deep insights were also manifested visibly among many of the people involved.  Everybody engaged took something from the experience. 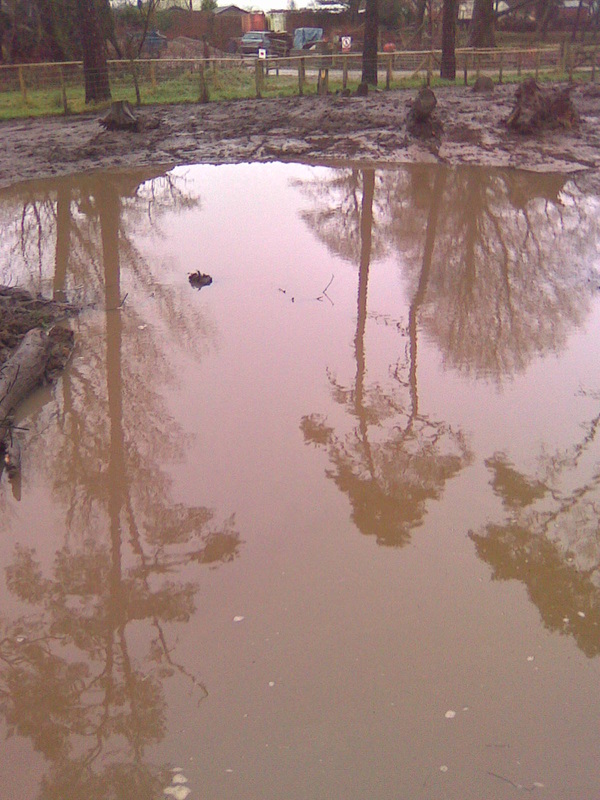 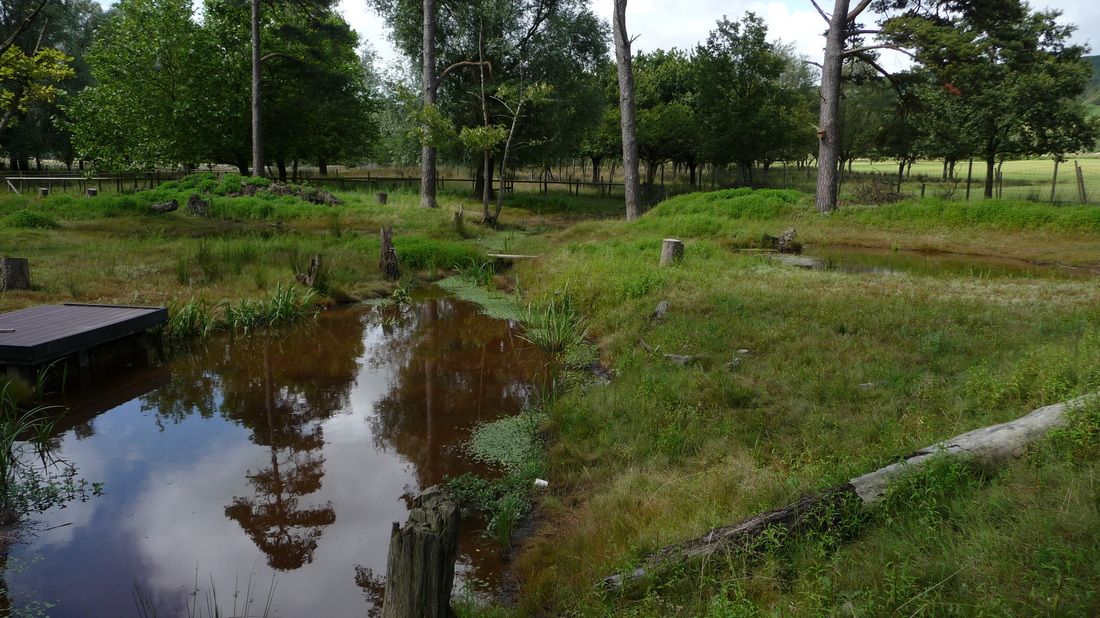 Once the ponds are excavated, down goes a layer of sand to protect the liner, then down goes the bentonite liner. 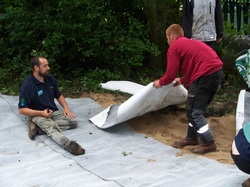 Wherever possible, it is most desirable to create ponds without the use of a liner, and to allow nature to take it`s course and colonise itself.  Plants and animals very quickly establish themselves.  However, at times it may be beneficial to achieve as instant a hit as possible.  In this instance, three wildlife ponds in a school grounds presented an ideal opportunity for an interactive outdoor classroom, a place to observe and interact with nature.

I also prefer to allow natural rainfall to fill the newly excavated pond, but in the case of a school wildlife pond or even better, ponds, we tend to fill them with water.  In the case of the project pictured here, the local fire brigade got involved and came and filled the ponds for us.

Down goes the liner. 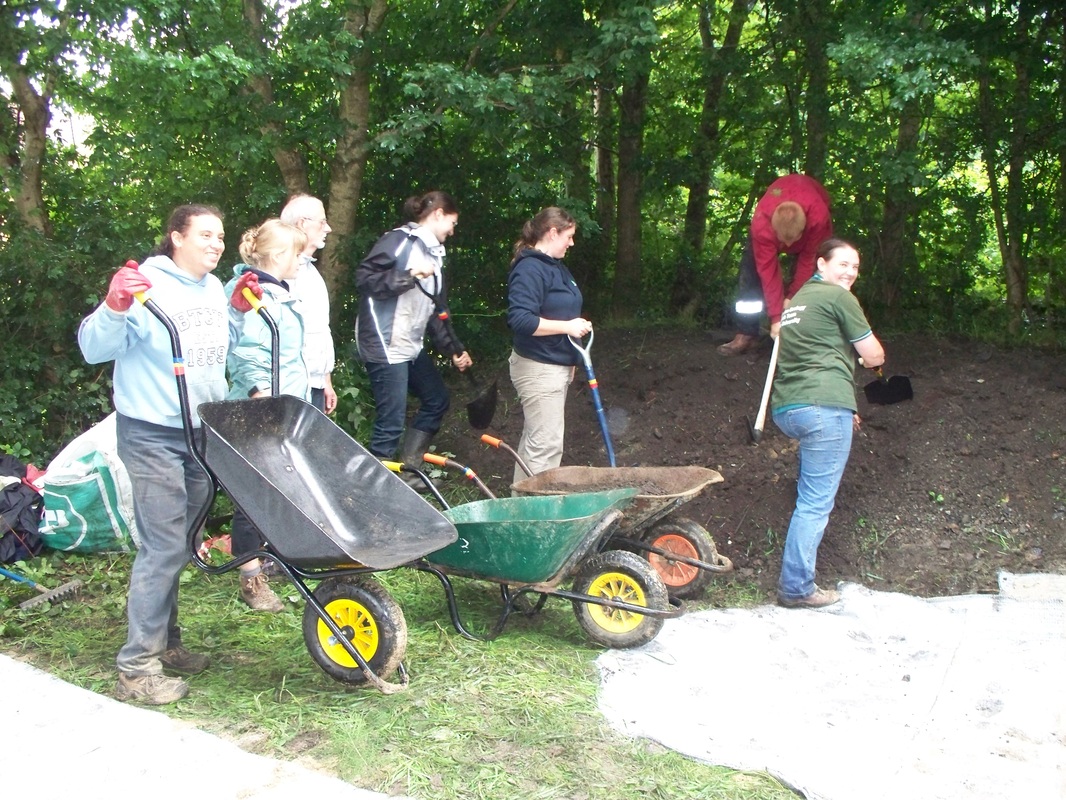 Forming a chain and throwing subsoil back on to the Bentonite liner prior to filling with water. 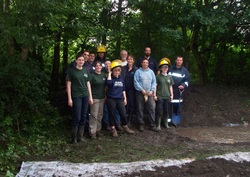 Doing so provides a base for plants to establish, invertebrates to burrow, and really boosts the ponds development.  It also weighs down the joins between the rolls of bentonite whilst it swells and prevents leakages.  It also produces a natural look.


A good gang such as we had on this day can produce three good ponds in a few hours, although the digging was done by machine previously!

Subsoil on liner, (top soil has too many nitrates and causes an algal bloom) and in goes the water. 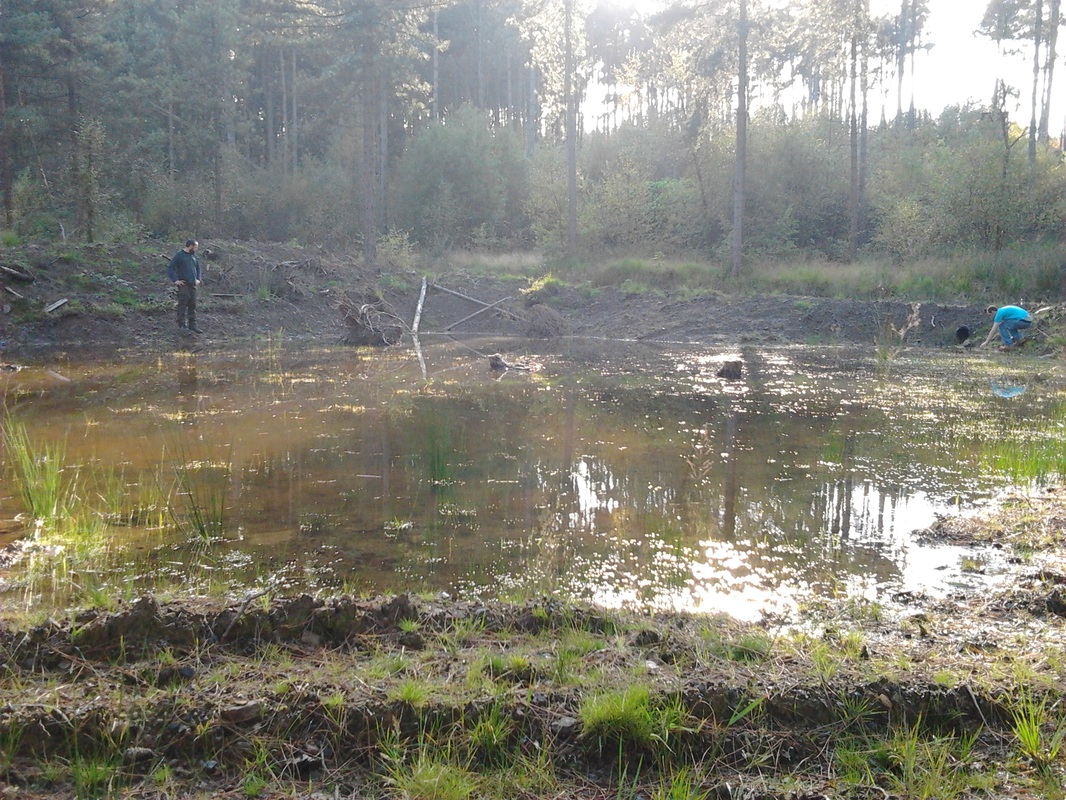 A few moths old with no liner necessary, my favourite kind of wildlife pond, one of eight that we put in on this piece of land.  Funding was sourced by the Million Ponds Project 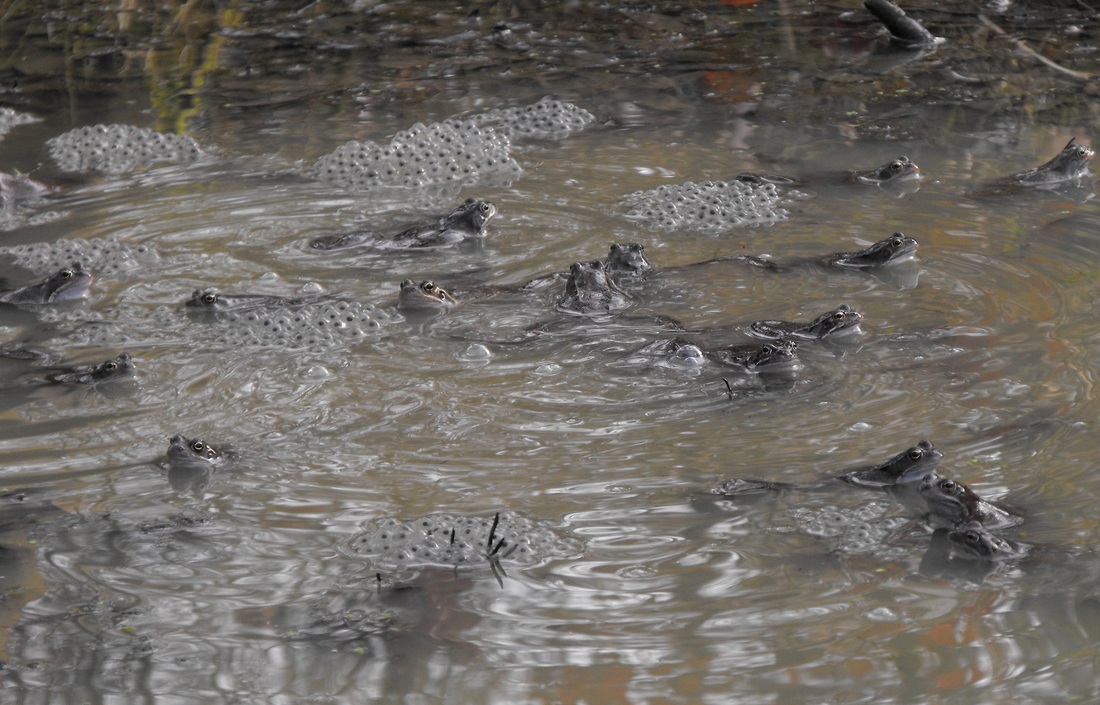 An abundance of frogs during a spawning frenzy.  Nature displays her approval.

Observing and Interacting with nature, discovering an established colony of European Wall Lizards, (Podarcis muralis) the first and only known colony to be found in Wales. 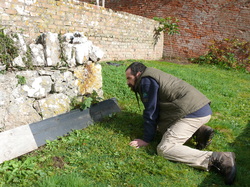 When we formulated South and West Wales Amphibian and Reptile group (SWWARG) the most exotic reptile that I expected to encounter was a red eared terrapin, as they frequently turn up in park ponds and lakes.  However, as you can see I discovered something far more exotic .

The European Wall lizard is present at several isolated locations in Southern England, but until recently was not known to be living and breeding in Wales.  There are concerns about displacement of native lizard species.  The Wall lizard has very specific habitat requirements however (the clue is in the name!) and apart from one spot on the cliffs of Bournemouth where the range of habitat also suits the native common or viviparous (live bearing) lizard and the native sand lizard (a rare and protected species) there is unlikely to be competition between species due to the fact that prime wall lizard habitat is not likely to support either of the aforementioned indigenous species.  Where there is species separation (as is the case at the Welsh site) I personally don`t think that the wall lizard will cause a problem as far as displacement of indigenous lizard species is concerned.  In the unusual situation where species overlap does occur, then it is not unlikely that the vivacious wall lizard will outperform the native species.  The native viviparous lizard (Zootoca vivipara) produces one batch of young per year, and the rare sand lizard, (Lacerta agilis) just one clutch of eggs that are vulnerable to both dry and wet summers.  In comparison, the European wall lizard can produce three clutches in a year, although such productivity is exceptional. 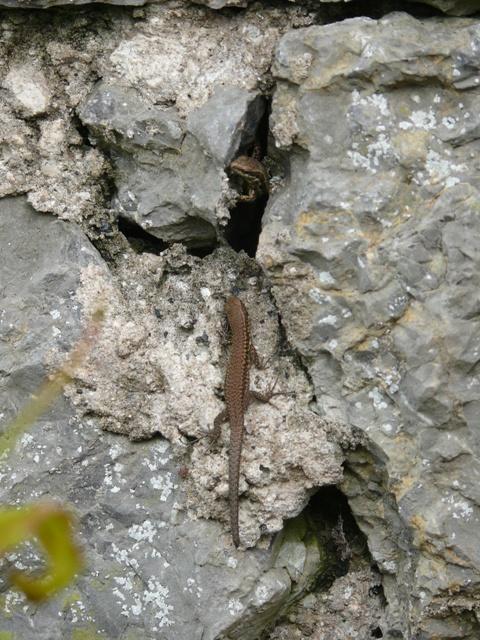 A pair of juveniles investigate the October sunshine. 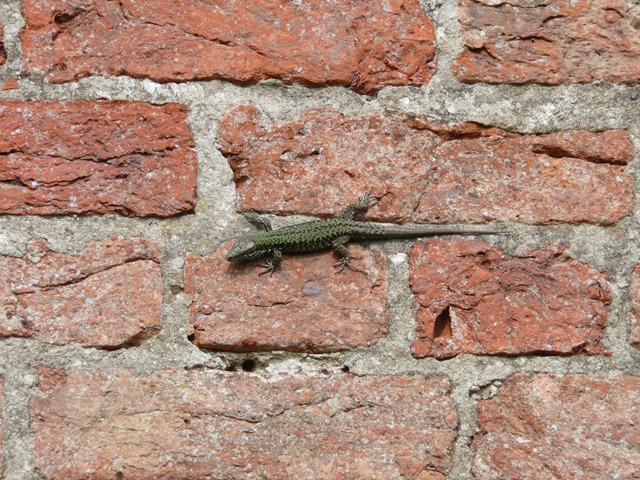 A large adult male.  The bricks are a useful size comparison.  For more information on Wall lizards in Britain, take a look at the excellent Wall lizard project, put together by Steve Langham of Surrey Amphibian and Reptile Group (SARG) here 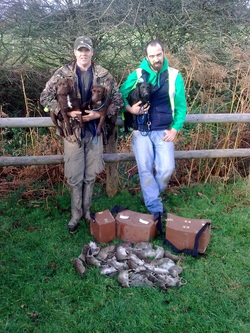 A pet`s corner at a local park that keeps a variety of poultry such as pure breeds of bantam, ducks and turkey`s, guinea fowl, rabbits and pygmy goats was supporting a significant brown rat population.  Poisons and traps could not be used at the site (thankfully) but some action was necessary as the rats obvious presence was becoming a cause for concern for the parents of children visiting the pet`s corner.

Early one morning we used ferrets and well behaved terriers to reduce the population of rats.  Ferrets are mustelids, a group of mammals that are, with few exceptions, totally carnivorous .  Mustelids include stoats, weasels and the ancestor of the semi-domesticated ferret, the European polecat.  Polecats are relentless pursuers of their quarry with fast metabolisms that need satiating at regular intervals. Polecats possess particularly long and flexible spines, and have evolved primarily to be extremely efficient hunters of subterranean quarry.

Successful and efficient ratting requires a symbiotic team of ferrets and terriers that get on.  The terriers must be raised from pups alongside ferrets and be totally familiar with them.  The dog has to be able to make a split second distinction in the heat of the moment, when the "blood is up" whilst in full hunting mode, between a bolting rat and a ferret emerging from a rat hole.  Any dog used to catch rats must also be entirely trustworthy with farm stock, so once again, raising the pup alongside poultry is the key to a successful ratting  dog that doesn`t do more harm than good on a small holding.

The objective of ratting organic style is to create the opposite of normality for the rats.  Normality for the rats during daylight hours is safety below ground and danger above ground unless that is of course a polecat decides to go hunting through the warren.  So ferreting can create the illusion that above ground is a safer survival option than below ground.  A ratting dog that knows the score will wait silently whilst the ferret works below ground, not telegraphing it`s presence to the rats below ground by barking or scratching excitedly.  It is important too that the human members of the team do not talk, smoke or do anything else that gives the game away, otherwise the rats may well stay below ground and fight it out with the ferret. It is essential to remain still and calm, especially when rats bolt.  Dancing around shouting and screaming will not only discourage further rats from bolting and potentially cause problems for the ferret, but will also reduce the terrier`s chances of success significantly.  If a rat heads for your feet (which sometimes can happen in the confines of a chicken run) stay still and let the dog do it`s job. The rats that leave the sanctuary of their warren to avoid the ferret that tracks them by scent through the network of tunnels are taken by the waiting terriers. Being more than large enough to lift an adult rat off the ground, a terrier very quickly dispatches a rat by shaking it vigorously which causes the neck to break.  The terrier then drops the rat and is ready for the next one that bolts, sometimes multiple rats bolt at once, which is why a team of a few good terriers works best.

All the rats we caught this day were beautiful healthy corn fed animals.  What I do with the rats after a ratting job is keep them as ferret food.  The ferrets enjoy a "real deal" diet of fur and feather as it comes, just as it would do in the wild state.  Ferrets that are fed a natural diet such as this are unmistakably full of zest and possess a vitality and a sheen to their coat that has to be experienced to appreciate.  The ferrets instinctively enjoy a day`s ratting, and get a meal as a reward, just as in nature.  The dog`s also enjoy themselves immensely and get excited when the ferrets are boxed up for a trip out.  The rats obviously don`t do too well out of the deal, but fair significantly better against a natural predator such as a polecat/ferret compared with the prolonged suffering of poisoning or being crushed in a trap.

Ratting with ferrets should not take place in the summer.  Whereas the larger buck rats will bolt from a ferret, the smaller doe rats that have very small young in the nest or that have just built a nest in a nursery chamber ready for the imminent arrival of their litter are very likely to stay put and fight the ferret.  Avoid any unnecessary injuries to the ferrets by only ratting during the winter months. 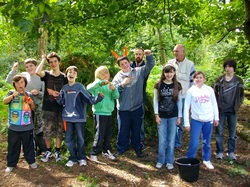 Child mentoring has featured constantly in my work, and outdoors is where it has the greatest benefit.  Here, a lively gang of children have enjoyed a day of bushcraft activities in the outdoors. 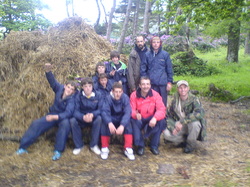 A group of slightly older lads having completed the construction of a survival shelter.  All of them thoroughly enjoyed it and benefited from the day on many levels. 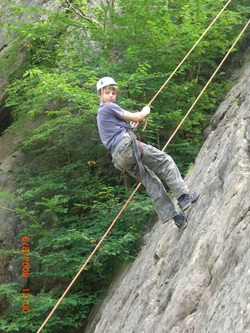 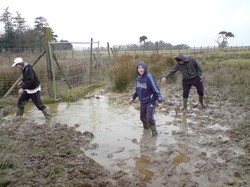 Having fun in the mud! 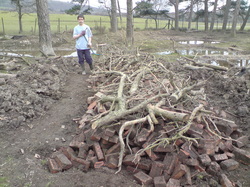 Building a hibernation site for wildlife. 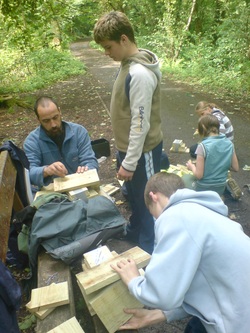 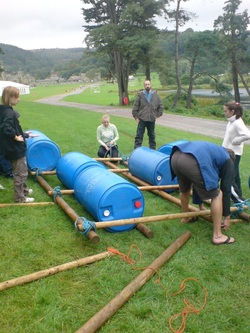 Building a raft together as a team, then using it. 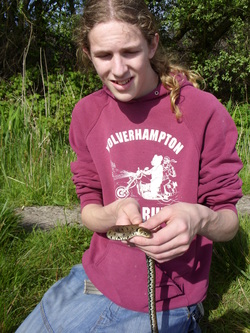 A young man`s first experience of the wonder of a wild grass snake.

Back to top of page or go to the next element of my Diploma output 1, CV