Evidence of involvement with conservation and public speaking;
Text highlighted in green indicates my involvement

The Conservation of Amphibians and Reptiles in Wales

ARG UK is a network of over 40 volunteer groups covering the UK, working to promote the conservation of our native amphibians and reptiles. This conference has been organised entirely by volunteers and many of the speakers are appearing on a voluntary basis. If you’re able to support ARG
UK with a donation, however small, your contribution will be put to good use.

Amphibians and Reptiles Opportunities and Obligations for              Local Authorities Conference

The objective of the conference was to raise awareness of amphibians and reptiles among Local Authority employees, highlighting legislative requirements and practical methods of good working techniques.
The target audience was Local Authority ecologists, planners, grounds supervisors and other interested people.
To quote one of the speakers
“…..The event was perceived very well and looked upon as a positive step forward not just in terms of how to improve herpetile conservation but also how to facilitate best practise in fulfilling statutory biodiversity protection duties within the planning and landscape management sector ……two students who attended said the conference had fired them up and that they had learned more in one day than in the whole of last term of their course at College….”
The day was chaired by Peter Williams, who at the time was Chair of Glamorgan Biodiversity Advisory Group.  Local and national experts in the field gave exceptional presentations, giving a comprehensive overview of legislation and policy relating to herpetiles, their ecology and identification, management techniques and example of successful projects and mitigation strategies.  The presentations were:
Amphibian and reptile status - legislation and planning - by Mike Oxford
A case study of Amphibian and Reptile mitigation in the planning system - by Gareth Ellis, Brecon Beacons National Park
A successful community project on Great Crested Newt mitigation - by Kylie Jones, NE Wales Wildlife
Amphibian and Reptile Habitat Management - by Peter Hill, South and West Wales Amphibian and Reptile Group, and Dan Forman, Swansea University
The million ponds project - by David Orchard, Herpetological Conservation Trust
Two workshops followed this:
Habitat management - by Dan Forman, Peter Hill and Jon Cranfield.
Planning and Legislation - by Mike Oxford and Gareth Ellis.
Further advice is available directly from the speakers listed below.
Peter Hill – South and West Wales Amphibian and Reptile Group
E-mail: p.hill1@npt.gov.uk
Tel: 07880787433
Dr Dan Forman CBiol.MIBiol.EurProBiol. - Conservation Ecology Research Team
Department of Environmental and Molecular Biosciences, Institute of Environmental Sustainability, Swansea University, Singleton Park, Swansea, SA2 8PP
E-mail: D.W.Forman@swansea.ac.uk
Tel: 01792 295445
David Orchard – HCT Ponds Project Officer, part of the Million Ponds Project funded by the Tubney Charitable Trust
E-mail: david.orchard@herpconstrust.org.uk
Tel: 01204 529312 / 07817 373853 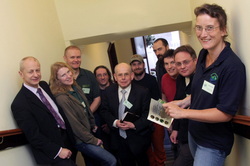 
The idea for this conference was hatched between myself (SWWARG) and Jon Cranfield (ARGUK).  The intention was primarily to deliver the conference to planners, biodiversity units and the worker`s on the ground that utilise strimmers, tractors and mowers to "tidy up" areas of parkland during the spring and summer, times of intense activity for amphibians and reptiles .  The conference and workshops educated the attendees with regard to windows in the year when such work could be carried out with the least amount of damaged caused to vulnerable hedgerow and edge habitat ecosystems.

The British Grass or Ringed Snake  (Natrix natrix helvetica) is our largest terrestrial reptile and has disappeared from a much of it’s former range.  The general background colouration is olive green, grey or brown with black bars along each side of the body, which vary greatly in frequency and size among individuals.  The much-publicized “yellow collar” which also varies both in size as well as intensity of colour, often fades in older individuals, particularly in the case of females, and in practice consists of two triangular patches which precede two similar shaped but generally larger black patches.  The underbelly is generally off white to yellow with varying degrees of black marbling, although animals with a predominately black belly are common in the Neath & Port Talbot area.

Females grow considerably larger than males and can reach over a meter in length, whereas an 80cm male would be an exceptionally large example.  The most reliable method of telling the sexes apart is to compare the bulge which houses the hemipenis and greater proportionate tail length in the case of the male with the much shorter tail length (and hence lower sub-caudal scale count) as is the case with the female.

Grass snakes generally emerge from hibernation in the Neath Port Talbot area during early to mid March, the males generally doing so a few days earlier than the females.  The grass snake is markedly the most itinerant of British reptiles due to the fact that as a species it requires a variety of habitat factors, and as a result is the most commonly encountered road casualty reptile.  It is also Britain’s only egg laying snake, and indeed is one of only two British reptile species that does so, the entire of the remaining indigenous reptile species being ovoviviparous (i.e. live bearing) as an evolutionary adaptation to living at the northern most extremity of their natural range.   As such, the grass snake depends entirely on successfully seeking out areas, which generate heat and moisture in order for the eggs to develop and regularly travel substantial distances in order to do so.  Compost heaps, manure piles and woodchip piles are all realistic alternatives, but are all too often disturbed by people at just the wrong time, before the developing young have had a chance to hatch.

Amphibians are currently in decline due to a variety of factors, which is unfortunate for the grass snake as amphibians also form the bulk of grass snake diet.  During the spring therefore, grass snakes are often found in the vicinity of suitable water bodies (not just ponds) and surrounding suitable sun exposed terrestrial habitat, but often disperse into adjoining heathland or scrub during the course of the summer when amphibians have left the water.  Yet another vital component of suitable grass snake habitat is access to traditional hibernation sites that are often communal due to their scarcity, which incidentally is also regularly the case with egg laying sites.  It is mandatory that the hibernation site is frost-free.  As such, south-facing banks providing choices such as mammal burrows, deep leaf litter, tree buttresses with cracks and crevices and overgrown log or rubble and rock piles are all options.  These areas can be as far away from the spring feeding and mating grounds as several hundred meters, hence connecting corridors that enable the grass snake to travel safely such as ditches and hedges must be in place.  Travelling across open country puts grass snakes at risk of predation from a variety of natural predators both aerial and terrestrial.

All reptiles are protected under the Wildlife and Countryside act 1981. 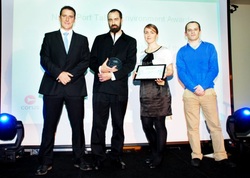 The first Neath Port Talbot Environment Awards ceremony was held on the 20th November 2009.
Mentro Allan, the project that I worked with at the time was nominated for the Green Public Sector Award category, mainly due to the inclusive engagement of various groups of young people during the habitat creation sessions that I integrated into the project activities.

Mentro Allan then went on to win the category and I was presented the award by Iolo Williams, the Welsh Wildlife presenter.  There is a link to the nomination video here 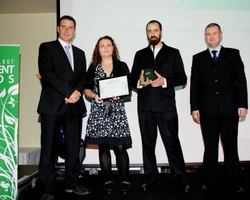 South and West Wales Amphibian and Reptile Group (SWWARG) were nominated for the Action for Wildlife Category.  I was pleased to also collect this category award on the evening.  It was certainly an accomplishment to receive recognition for the work that had been done which achieved multiple targets.  Personally, at the time, successfully increasing biodiversity levels whilst simultaneously raising awareness and educating all that were involved in the work was deeply satisfying.  Additionally, embarrassing myself further by being filmed and wearing a suit (note no tie!) was certainly worth it as SWWARG gained access to further funding as a direct result of the awards which has since been used on a variety of projects, all of which simultaneously increase biodiversity levels and develop a respect, understanding and connection with nature among the human project participants involved.  There is a link to the nomination video here


Rather than submit an entry the next year, I instead judged the Action for wildlife Category, another viewing link here

Back to top of page or go to Appendix ll of my Diploma pathway.