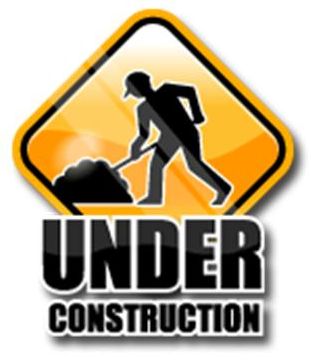 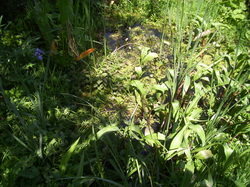 Frog jungle
I am particularly pleased with the way in which the pond has developed so quickly.  The lush vegetation growth in and around the pond is vigorous and includes various irises, marsh marigolds, water forget-me-not and bog bean.

The tiny oasis is crammed with life, and despite the presence of a colony of palmate newts, there is an abundance of frog tadpoles surviving. 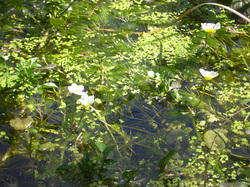 Water crowfoot flowering
Predator and prey (newt and frog tadpole) can co-habit in a situation close to nature such as this thanks to a profusion of diversity in the pond and surrounding habitat.  Diversity of plant life and diversity of available food for both predator and prey in the system.
The multiple complex "edge" created by the profusion of aquatic plants provides the tadpoles with the ability to stack functions, feeding whilst sheltering.

Earlier, (in April) I harvested two wheel barrows of weed from the pond, taking about a third of what was in the pond.  I lay it at the pond edge sloping down to the pond to allow creatures the opportunity to return to the pond.  The next day I added two wheel barrows worth of lovely green material to my compost piles.  Looking at the amount of vegetation in the pond now, (just over a month later) it is hard to believe that I harvested so much such a short time ago.

Observation; Fresh water is incredibly productive, proportionately, even more so than soil. 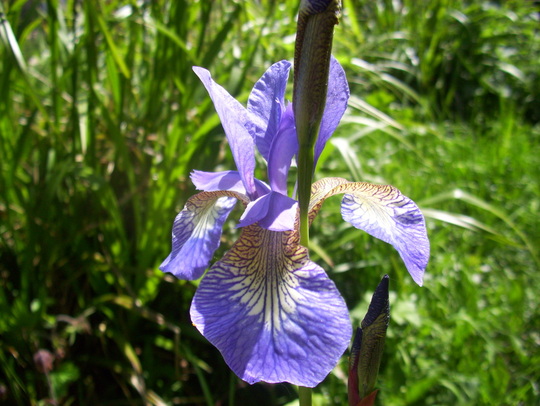 An Iris flowering at the pond edge

I will remember this observation and apply it in the future elsewhere.  A larger project with room for sizeable water courses has the potential to be incredibly productive, increasing levels of biodiversity whilst providing an abundance of food.

One example of regenerative aquaculture that functions as a productive eco system cycling energy, producing food for humans and habitat for wildlife with no need for any maintenance is Sepp Holzer`s system of ponds and wetlands.  An explanatory film is available here. 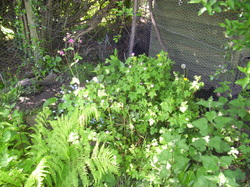 A pile of logs buried beneath soil at the foot of the willow tree behind the pond is supporting forget-me-not, salad burnet, wild garlic, wild straw berries and earlier on, bluebells.  Ferns, mosses and a few nettles are here too, and the area provides frost free hibernation dens for amphibians. 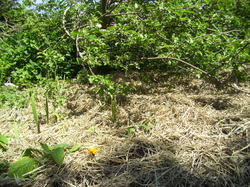 Early this spring, I mulched with cardboard, compost and straw around the base of the apple tree.  Into the mulch I have planted foxgloves, gladioli, chives, nasturtiums and garlic.   I intend to add some mint and wild strawberries from the vigorous bed at the top of the garden.

Although delicious, the apples that our existing tree produces are early cropping, (August) and do not store well.   They have to be eaten more or less straight away.  The chickens benefit from the surplus. 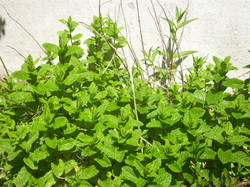 Mint
I plan to add more fruit trees into the design, and include later cropping varieties (October) that store better.  I will support them all with plant guilds including soft fruit bushes such as blackcurrants and raspberries. Mint, chives and garlic are all beneficial guilding plants that suit apple tree guild planting.  I am growing a lot of chives from seed now and I also plan on dividing and transplanting the mint at the top of the garden which is growing productively. 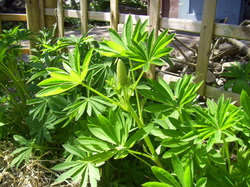 Lupins are growing back to the left of the existing apple tree.  These are some of the plants from which I collected the seed to grow on my support guild of nitrogen fixing plants.
Behind the lupins is a low trellis.  I have planted honeysuckle, peas, mange tout and a few wild strawberries around the trellis and an evening scented Jasmine at the far end too.

Propagation saves a lot of money! 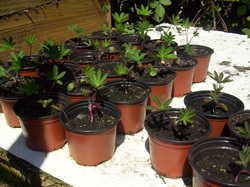 Mass production of home grown lupins
Plants can be very expensive to buy in conventional garden centres and nurseries.  Here you can see part of my developing support army of nitrogen fixing lupins, and these are the tip of the ice berg!  I collected all the seed needed to grow these plants (and hundreds more) from the few plants that I brought here with me (some pictured immediately above).  The compost was produced here also, and the second hand pots came from a local nursery.  I grow the young plants on initially in the existing shed that has a corrugated clear plastic roof so that they get a head start, then I harden them off outside.  The seedling lupins in the image to the left are all out on a board which is on top of a compost bin.  The board keeps the compost shaded, keeps the rain out of the compost and provides a surface to put out lots of young plants in pots, stacking functions. 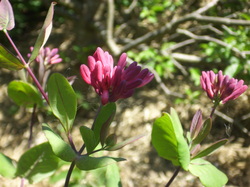 Honeysuckle is a good insectary plant that climbs and provides biomass. To propagate more, I weight down leaders from the plant with a stone or/and a little compost.  At this time of year, it is not long before that part of the leader sends down roots of its own, and hey presto, a baby honeysuckle plant!  Once established with it`s own root system the baby plant can be cut loose and planted elsewhere in the garden. I am planting honeysuckle around the garden at numerous vertical spaces, and growing climbing beans and peas amidst them. 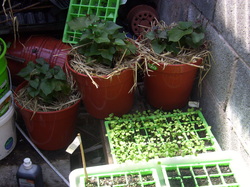 Sweet potatoes growing in pots of compost, surfaced mulched with straw, in the pre-existing shed with a corrugated plastic roof.  Basil, rocket and chives are all germinating in the trays beside them.  I hope to have organised a poly tunnel in the next month, and to be able to transplant a lot of plants that are growing on in the shed such as the sweet potatoes into the poly tunnel.

There is a lot more growing on in the shed too! 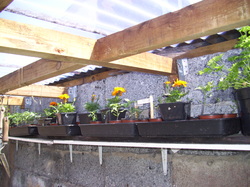 Three different types, all from  the Real Seed catalogue, who I cannot praise enough!

Latah, an early cropping bush variety that has leaves that are very far spaced, they look a bit odd, but apparently the far spacing allows more light in which means the tomatoes ripen early.  The tomatoes all sit among marigolds, parsley and basil, all good companion plants.

As well as Latah, I am also growing on original gardeners delight tomatoes from Realseeds. 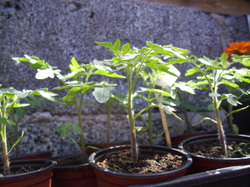 Gardener`s delight is a well known vine variety that needs no introduction, but I am also growing a lesser known vine variety. also from Realseeds, a super early sweet yellow cherry tomato called Galina.
According to Realseeds Galina is; " A hugely productive cherry from Siberia, and we are really impressed by it - very sweet flavour balanced by good acidity.

The bright yellow cherry fruit are in neat bunches, and don't fall off when ripe, which makes picking easier.

It is early to get going (not surprising given where it comes from!),  but just as importantly, it fruits over a long period – it just keeps on going forever , long after most other plants have stopped fruiting."


They are growing well and I also hope to have them climbing in the intended poly tunnel.

Also growing on in the shed are... 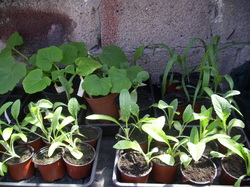 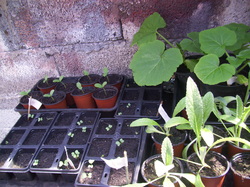 The young plants to the far left and rear of the image are water melons which are also destined for the polytunnel.   The smaller plants are baby calabrese or broccoli.  We eat a lot of broccoli, and hope to grow plenty.  I have a good few growing on in the shed and another earlier batch slightly further developed outside in pots.  These are destined for a poly culture that I have planned which is still currently lawn and needs to be mulched. 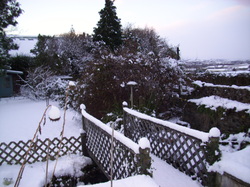 One of the only images of the old pond
The picture to the right, taken in January 2011, is one of only two that depict the old pond.  The trellis work is part of a bridge that crosses the steep sided pond.  Made entirely from concrete, the pond was a danger both to wildlife and my baby son.  I created alternative habitat in the form of the new wildlife pond and surrounding terrestrial habitat that is rapidly developing into an established ecosystem and already supports a multitude of plant an animal life.

Now its time to dismantle the old pond!

Our friend Cher sits serenely at the foot of the bridge that crossed the old pond. 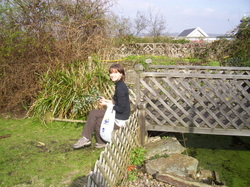 This image shows the old pond and bridge.
Pulling out the bridge was easy enough, but the concrete construction of the pond was a considerable barrier.  I hired a concrete breaker and spent an entire weekend, baling out, and breaking up the concrete pond.   I smashed the concrete in to pieces, and filled the resulting hole with it.  The site is going to be very well drained as a result, in complete contrast to being a stagnant sun starved (due to the bridge) wet area.
Soil stored in a pile elsewhere in the garden that came from excavating the new wildlife pond last year was then wheel-barrowed across and used to cover the broken up concrete.

I am afraid I didn`t photograph any of this stage, I was too busy getting on with the slogging! 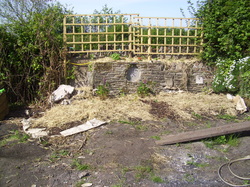 Here is the same spot as depicted in the image above.

Trellis supports young mange tout plants, and lupins, sweet corn, borage, squash and nasturtiums have been planted in compost that has been lain on top of the soil and broken up concrete.  A top dressing of moisture retaining straw mulch has been added along the planting.

Bare soil in the fore ground is part of the area that the polytunnel is destined for.

Clearing the way for the polytunnel. 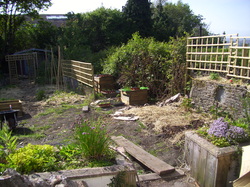 The image here has been taken from the same angle as the snow covered bridge image above.

The bare soil area will hold the poly tunnel, which I plan to build 12ft wide and 15ft long.

We have chosen the area for the poly tunnel as it receives a lot of sun, and is also close to the kitchen.