The house I never wanted!        The problem is the solution.

Not too long ago, a house became by responsibility.

It was in a poor state of repair throughout although basically structurally sound (although not entirely!)   It was certainly not what I particularly wanted nor what I had planned.

There are very few truly representational images of the house at the time before it became my responsibility except for the few included here.  The first image shows exposed brick work in places, and the rug on the floor hides a bare concrete floor.

The whole place had a very tired energy about it, and a significant amount of work needed doing throughout. 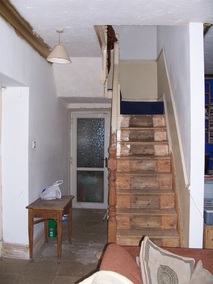 The house didn`t feel like a home.  It was a continuous drain on my available resources.  It needed to be turned around from a perceived millstone around my neck into an asset, converted from a monster to an ally.

Survey
My version of surveying the house and garden revealed that the house was in considerable disrepair, and was (and still is) in a situation of negative equity as far as the mortgage on the property was concerned.  Fairly recent amateurish attempts at home improvements had exasperated the situation  and had in fact further reduced the property`s value.  The garden was full of scrubby weeds including a patch of impressive stinging nettles, there was Japanese knot-weed growing in one or two spots, and an area of decking extended out from a shabby and ineffective conservatory out as far as a stretch of river that runs through the end of the garden.

Assess
Although I have no desire to live at the house, potentially, it could become a family home for somebody.
The productive solution would be to renovate the house, increasing its value to a stage at which it could be sold, freeing myself from the perceived "monster". If a yield could be made in the process that could be directed towards creativity, productivity and genuine benefit, then the monster would indeed become an ally. Any yield could be combined with the yield from Alex`s house project in time and put together as a collaborative resource.
To do so would require a substantial amount of time, energy and money, none of which were freely available to me.
Conventional building materials would be necessary to reach the objective.   Obtaining the materials themselves would incur considerable expense, but the monetary cost of the skilled labour required to complete the renovation of the house to a stage at which it could be sold was totally unachievable.

Working full time meant that I did not have the time to do all of the work myself, and I do not have all of the necessary skills to do so, nor the time or means available to devote to learning them.

Design
To achieve the desired objective I would need to create my own economy.
I contacted a friend of mine who was living in Devon.  Cean is a skilled plasterer who can turn his hand to a variety of tasks.  His living situation was becoming more tenuous as work was becoming more difficult to secure and the rent on the cottage that he lived in combined with living expenses was considerable.  I suggested that Cean and his partner Cheryl moved into my house. We could then exchange services; I would provide them with a home, Cean would renovate the house.

Implement
Cean and his partner Cheryl moved into my house.   Our friendly arrangement being that they would live rent free at the house.
Cean would look for work in the area, his partner Cheryl would seek to attend the local university and instead of paying rent for their living space, in his available time Cean would renovate the house.
I would pay for the building materials and Cean`s labour was his rent. We considered each others needs and interests and as well as creating our  own economy, we stacked functions and considered the ethics of people care and fair share. 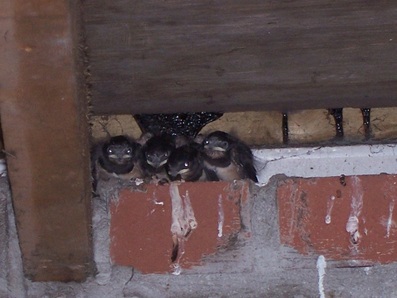 Fledgeling swallows in the house at around about the time it became my responsibility.
The project is ongoing.  To date, structural repairs have been carried out throughout.

Heat saving double glazing has been installed in the front half of the house.

A new boiler has been installed and now works in conjunction with pre-existing radiators.

Approximately half of the door linings and doors in the house have been renovated.

Upstairs, two rooms and the hallway have had the floors stripped back to the original floor boards, gaps filled, and the floor levelled and sanded.

Plastering has been restored throughout internally.

Two thirds of the Artex ceilings (a considerable job in itself!) have been smoothed over by Cean and painted.

A large section of the external rendering has been hacked off, and re-plastered.

Externally, a large area of the pathway around the house has been excavated, as over the years, various people have added path on top of path until problems with damp became apparent due to the raised floor level.

Currently, work is under way creating a wet room/shower area downstairs.  Situated offset from the entrance porch to the house, it is an ideal facility should someone return home very dirty for whatever reason.  It would also serve dog owners well if returning from a wet and muddy walk. It is also being constructed with elderly or infirm people in mind. 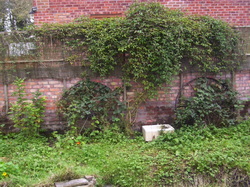 Part of the garden, Autumn 2011
The project is progressing!  Progress has been made since creating our own economy and stacking functions.  People care and fair share are in consideration and practice. Earth care is also being considered wherever possible.

Reusing available and existing resources wherever we have been able to, such as stripping the floor back to the original floor boards and not "importing" carpet or similar, has worked well and been satisfying as well as creating a warm, attractive finish.

Not forgetting the final objective of increasing the value of the property to be able to sell it and hopefully obtain a yield, there is additional methodology to stripping the floor back to the original floor boards.  Anyone viewing the house, should they like the exposed floor boards and wish to carry on using them as the finished surface, then great! If however they do not and would rather add a floor covering such as carpet (their choice at the end of the day) then at least they can see what they are dealing with; i.e. there are no hidden suprises as the floor in it`s entirety can be seen.

The wet room is currently being constructed downstairs.  Upon completion, the bathroom upstairs can be tackled. Once the upstairs bathroom is cleared, prior to being renovated, the beams that need attention in the bathroom floor/kitchen ceiling can be addressed. 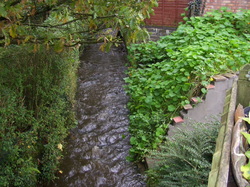 Once the beam problem is addressed, attention will be turned to the bathroom and then the kitchen.

The garden is an ongoing project also.  The image to the left shows the river at the bottom of the garden.  The nasturtiums on the right bank have contributed to the process of gradually ousting the Japanese knot weed.  No herbicide has been used to date.

Ideally I would like to create a dam in the river, and install a water turbine and catch and store energy in the form of hydro generated electricity.  Unfortunately, local authority and Welsh water policy currently prevent me from doing so.  In the meantime, the river brings pleasure and good energy to the place, and brown trout and the occasional eel swim by.

We have utilised chickens to clear the majority of the "weeds" in the garden, (they even eat young knot weed shoots) and of course we benefit from the egg production. 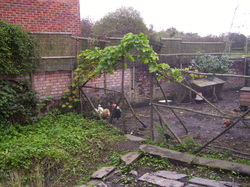 Cean has grown his own vegetables this year, including beans, peas and potatoes.

The grape vine that we planted has enjoyed it`s first year. A mixture of herbs, nitrogen fixing lupins, a mixture of wild flowers and nasturtiums comprise the majority of the ground cover, and numerous bulbs produce spring time colour and vegetation.  There are plans to introduce ramsons, and wild strawberries in the near future. 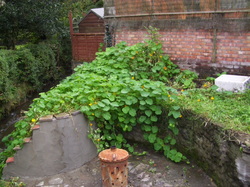 Upon reflection, the project is progressing through small and slow solutions very well.

Cean is making steady progress at the house.

This project is ongoing and time-wise likely to reach a stage of some form of completion at around the same time as my diploma accreditation.

Future tweaks that have been considered are the design of a space by the river for relaxation.  Perhaps a small roundhouse with a riverside cob oven and seating designed into the fabric of the whole area.

Digital camera, the skills and experience of trusted friends, inspiration from nature and my partner Alex.


Back to top of page or go to the next project featured in my 2nd diploma output, Integrating Permaculture into my workplace.