The first phase of the design process of this project is available in output ll of my diploma portfolio here.


Progress at the site is currently, on appearance, slow.

This is partly due to consideration being given to the inclusion of a bicycle training track at the site.  This could potentially be a fantastic integration of the promotion of fun, physical exercise and raising awareness with regard to the bicycle as transport along with the concept of growing food and simultaneously increasing biodiversity levels all at one site.

It is expected that work will begin in earnest once the contractors are scheduled to have completed the Rhododendron ponticum regeneration eradication in the month of April which also happens to be when the next funding pot is accessible.
To help gain a better perspective of the site, here are a few short videos taken a month ago...


There have been several variables influencing the start time for this project...

Firstly, time has been spent by the site owner (local authority) deciding whether or not a bicycle training track will be included as part of the site.  As the area is intended to be enclosed by deer fencing, it is necessary to plan where entrances and exits will be situated for the cyclists.

Disadvantages of including a bicycle track in the design -

Advantages of including a bicycle track in the design -

Secondly, the firm that have been contracted to clear the Rhododendron ponticum from the site (the first phase of which has been completed at the site) have also been contracted to spray the regenerating stumps with Glyphosates.  This work has not yet been completed. It is due to be completed by April 2012.  Personally, I would have preferred to have approached the task of eradicating the regeneration by utilising less soil polluting methodology such as stump injection.  However, the site owners wish to honour their prearranged agreement with the contractors. 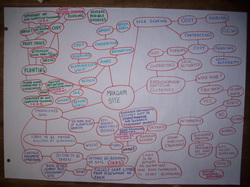 Various barriers to progression present themselves which I have looked at in the mind map to the left.  Click on the image to enlarge it.

Due to the high density of deer present at the site, deer fencing is necessary.  Although funding has already been secured once, due to the time delay whilst decisions were being made regarding the bicycle training track, funding will have to be reapplied for in April.

The first phase of rhododendron clearance at the site has been completed by the contractors.  The second phase, treatment of stump regeneration, is due to be implemented before April.  Unfortunately, the methodology previously agreed by the site owner and the contractors, spraying with glyphosates, is also likely to delay the project further.

Impoverished soil
Well over one hundred years of constant Rhododendron growth has resulted in severely impoverished, acidic soil.  It is intended to embark on an Intensive Re-Building of Soil (IRBS) programme utilising multiple 18 day compost piles, indigenous deciduous leaf litter collected from around elsewhere in the surrounding park land as well as the possibility of the addition of Dolomite limestone. I intend to involve volunteers and the people that I work alongside with this soil nourishing activity.
The Ecology department of Swansea University will be involved in monitoring and studying the soil condition during the development of the project, and will feed back to me.

A series on small ponds should ideally be designed before April.  A contractor has been sourced to undertake the excavation that is sympathetic to the needs of wildlife and also has experience of growing organically.  Funding is available in April to cover the cost of the excavation.  Ideally, pond creation would take place at a less sensitive time of year than April, the height of springtime. However, in this instance there is no developing biodiversity to disturb as the site is currently an acidic desert!

There are several funding sources available with which to purchase a number of fruit trees and nitrogen fixing indigenous trees.  Having identified possible sources and made them aware of the project, I will can now only wait until I have a clearer idea of when planting can commence.

Considering the likelihood of further pollution to the soil due to glyphostae residue, I predict that planting will not begin until the autumn at the very earliest.


For the time being, I will focus my energy on other projects that are currently more active and developing more positively than this project.

The next stage of the design process of this project can be seen here.