Earlier stages of this project of my Diploma are available here and here.


This stage of the project was all about implementation and maintaining that implementation, with a strong emphasis on observing, accepting feedback and acting upon it.  As this particular project is ongoing and active, I will return to the design phase throughout. 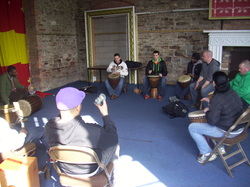 
I chose African drumming as an activity as it has a multitude of potential benefits for those that take part on so many levels, but particularly I chose it as the prime project "tool" to develop group cohesion.   My first experience of drumming in a group situation was with my partner, Alex, who has long been a member of a local drumming group.  The group, Shiko, as well as putting on a great many community orientated performances throughout the year also hold an annual drum camp.  The camp is generally held in a woodland and is a wonderfully grounding experience.  Families and individuals all get together and visibly enjoy the experience greatly.

Anyone can take part, but to really reap the benefits it helps to have an accomplished teacher on board.  Such skilled tuition very quickly enables even those with minimal confidence to blossom, and grow from the "underdog" scenario to a beaming, smiling and fully engaged and inspired human being in a surprisingly short amount of time, right in front of you!  It is definitely a group activity, and promotes co-operation and integration among those that take part like few other activities can do.

"When many simple drum patterns mesh together they form a unified energy which is greater than the sum of the individual parts. I think it was Jim who described it by saying that when the patterns all align and sit perfectly together, the rhythm 'zogginates'. This powerfully demonstrates the need for all members of a team to pull together towards a common goal, and it's obvious when it's (not) working. Everyone's role is important for different reasons, and all are necessary to create the full picture. In a previously imbalanced team, this can be an empowering experience for people used to being the underdog, and perhaps a humbling one for management."

The few sessions that we held with the group were most definitely a success and visibly benefited all who took part on many levels.

I utilised a local provider, Boyd Erlam from Community sounds.    Boyd has an open and relaxed, non-judgemental, very approachable manner and also has a natural gift for setting everyone at ease, and enabling a group to create some powerfully moving rhythms.


I don`t think I have ever heard so much laughter, whooping, hollering and general celebration of life from the project participants as I did during some of the drumming sessions.  I have absolutely no hesitation in recommending Boyd at Community sounds for anyone contemplating a similar project, and if you haven`t previously considered African drumming as an engagement tool, then I strongly suggest that you give it a go! 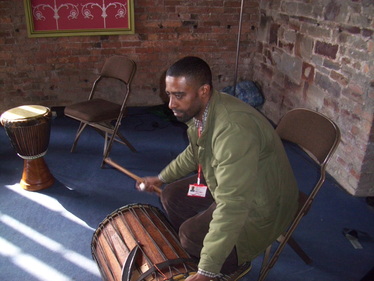 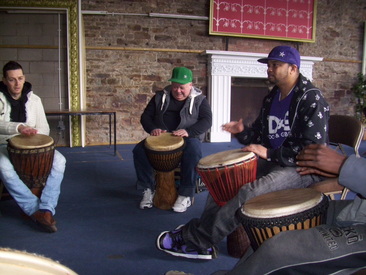 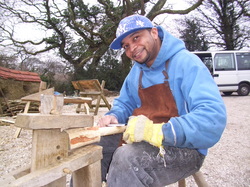 Green woodwork has a multitude of therapeutic benefits. The process of taking a raw piece of tree and transforming it by hand into a beautiful piece of craft, using traditional techniques and tools, is not only deeply rewarding and satisfying, but also mentally, physically, emotionally and sensually stimulating. It’s also really sociable and fun!

I chose to use two providers to deliver the greenwood working sessions.  Dragonfly creations run by a good friend of mine, Scott Blytt Jordens provides the expertise necessary to gain a good basic understanding in green wood work.  His mobile workshop can be set up at any woodland, and being outside in the woods for the day as a group is really the ultimate way to bring people closer to nature and allow their creativity to blossom.


The Down to Earth project presented an opportunity to integrate basic green woodworking with other activities.  A good working relationship developed between the group and our assigned Down to Earth instructor Barney O`Kane, and integration among the group developed very quickly as group members supported and assisted one another throughout.  The group clearly demonstrated an increased effectiveness.  Strong group cohesion, having first evolved during the African drumming sessions with Boyd Erlam, was plainly apparent and ever developing. 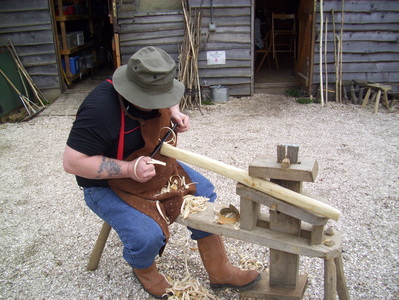 In addition to basic green wood working, some of the activities that the group took part in at the Down to Earth Project included; 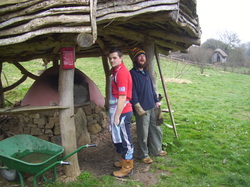 A beautiful cob oven is on site, protected by a living roof structure that makes cooking possible outdoors, whatever the weather. 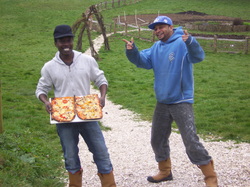 Plenty of delicious pizzas made by the group, ably assisted by Barney. 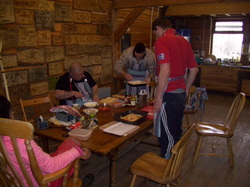 Everyone worked effectively as a functioning member of the group when undertaking tasks in the kitchen.  The plaques on the wall to the left of the image here were all designed by groups that have previously visited the Down to Earth project.  The designs were done using pyrography techniques on wood. 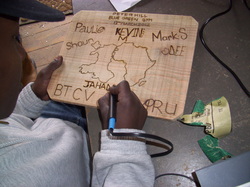 Pyrography means "writing with fire", from the Greek "pur" (fire) and "graphos" (writing). Essentially, it is the art of decorating wood with burn marks using a heated element or friction in the case of a pole lathe. 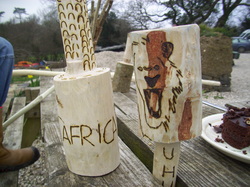 Having made their own beetles, (a green wood working mallet) the group then decorated them using pyrography.  Creativity and artistic flare was abundant.  The two beetles in the image to the left are certainly too good to actually use! 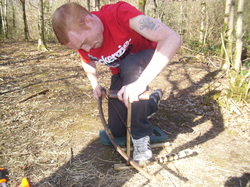 Being out amongst nature whilst being empowered by a range of newly learnt skills is a wondrous combination that has a profound effect upon groups.


I once again used the expertise of my friend Andrew Price from Dryad Bushcraft to deliver bushcraft sessions. 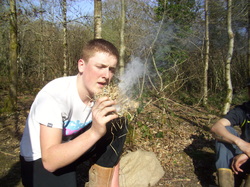 The moment just before the flames, smoke is rising well and the deeply profound satisfaction of making fire from friction is about to be experienced in the image to the left for the first time. 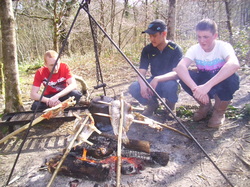 Time to reflect together around the fire whilst the trout cook on skewers selected, cut and fashioned with a knife by the group members themselves. The group also lit and built the fire themselves.    The experience was an empowering one for those that took part, and a calmness and increased confidence was plainly evident. 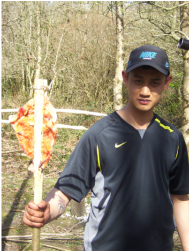 A trout, cleaned and prepared in the woods is neatly pinned out on hazel skewers and about to be cooked in the fresh air around an open fire.


Adding a variety of skills to the repertoire of the individuals in the group promotes the "jack of all trades, master of none" philosophy, markedly increasing resilience, self esteem and confidence.  Comments such as "I`ll do this next time I go fishing for sure!" were nice to hear.  Sounds of laughter and wonderment from around the fire and deep in the woods were heard throughout the day .

The evaluation in this instance has been constantly evolving.  My initial idea of a questionnaire at the beginning of the project and then at stages throughout has not been implemented, mainly due to the fact that writing is not the favourite occupation of the groups that I have been working with.  The funding for my job relies upon an incredulous amount of paperwork, questionnaires and surveys.  Adding to the list of "forms to fill in" would do little to increase enthusiasm for the project among the participants.

Instead, I have been constantly observing and interacting.  Accepting feedback and responding to it.   My observations so far;


Despite the fact that the forest gardening project has not progressed, discussions with the group regarding the perspective project were a regular occurrence.  Participants measured out the area and recorded the dimensions for the proposed project.  Questions followed and several conversations over the course of time meant that awareness was raised regarding subjects such as composting, mulching, plant guilds, chopping and dropping, mushroom cultivation, beneficial insects, aquaculture, natural building and integrated animal systems.


In addition to the groups discussed above, I also worked with another group of people through the mental health team of the Local Authority.  In order to respect the privacy of those people involved I have not catalogued this part of my work here.  The work was based at an allotment site that was in an advanced stage of re-colonisation by weeds.  In my very short time with the group, all present developed a firm grasp of the sheet mulching technique using cardboard weighted down with organic matter and surface mulching with hay, straw or whatever was available. All became familiar with the term Permaculture and many seemed interested in researching it further, particularly liking the reduction in heavy manual labour provided by the people care aspect of sheet mulching rather than digging.

At this stage of the project, my employment is about to change.  I am about to embark on a new job with different objectives. Rather than spend time tweaking something which will not be continuing in it`s present form, I will return to the beginning of the design process following reflection upon what I have learnt so far during this project "Integrating Permaculture Design into my workplace".


I feel confident following feedback that the activities that the groups engaged in during my work above have planted seeds of interest among all that took part.  Some of them have discovered talents that they were not previously aware of.  They all have a multitude of skills and talents of course, and trying new things has allowed these talents to shine through.  I hope that the experiences cited above have reinforced the "jack of all trades, master of none" philosophy among them, and that they may all be a stage closer to realising how limitless they all are and what they are capable of achieving for themselves.


Things are constantly evolving, and this unexpected change in employment will be an interesting one and will diversify my application of integrating permaculture design at work.


Return to top of page.


Go to "Integrating Permaculture Design into my workplace ll" here.